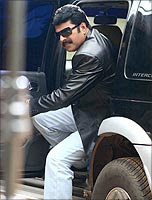 It is almost certain that K Balachander's Kavithalaya has bought the rights from Sreenivasan and the Tamil version of Kadha Parayumbol is going to be Super Star Rajnikanth's next film, a quickie before he starts Shankar's Robot.

Kadha Parayumbol is one of the finest films made in Malayalam in recent times.

Like our review said, Sreenivasan's script dominated the film so much that nobody is talking about the director of the film, M Mohanan who happens to be Sreenivasan's brother in law.
We decided to speak to the debutant director who is clearly on cloud nine. Excerpts:

How was the response to Kadha Parayumbol?

We are delighted by the response to the film and the distributors are really happy about the collections. Going by the reactions until now, I am sure that the film is slated to be a big hit.

What was special about the theme that attracted you to choose it as your debut film?

I have discussed several stories with Sreenivasan earlier too and when this theme came up, I could relate to it. The script had both humour and emotions which touched the heart, its development and also the emphasis on friendship made it a winning proposition.

The film is narrated through the eyes of an honest barber, who is going through a tough time. He barely finds the money to support his family. When the news begins to spread that a film hero, who had come to the village for shooting, was an old time chum of the barber, he suddenly received a new found importance.

Did you ever feel that Sreenivasan being the producer and script writer, and also the fact that he is your brother-in-law, will take away your importance as a director?

Never. Sreenivasan has scripted films for many other debutants and I think the film should be judged by its own merits and not by the fact that he is related to me or not. In fact his presence was a strength and support for me.

Mammootty has been presented as a superstar named Ashok Raj. Why did you not cast him as Mammootty himself?

We felt it won't look too good especially since there are some dialogues expressed by the superstar in the film, which may be interpreted as Mammootty's opinion.

The superstar in the film says that cinema is essentially a product of the director and the script writer and that actors are just tools who give life to them. Do you agree to this theory on a personal level?

(Laughs) There is no question of agreeing or disagreeing to that opinion. Those lines have been said by a character and we have presented it as his opinion only.

When did you first know that you wanted to be a filmmaker?

I hail from Koothuparambu in Kannur and was involved in amateur drama right from my childhood days. Films came to my mind mainly during my college days and I wanted to assist Sathyan Anthikkad, Siby Malayil or Kamal. Eventually I assisted Sathyan Anthikkad in nearly a dozen films from Ennum Nanmakal to Thoovalkottaram. I have been an avid movie buff all my life and feel delighted that I could be part of this industry.

What is your kind of film then?

I am interested in films which are intended for family audiences -- something simple, light and deep.

Kadha Parayumbol has been produced by Sreenivasan and Mukesh, who are mainly known as actors. How were they as producers?

They were extremely supportive. They had given me the freedom to choose any technician for the benefit of the film.

What about your future plans?

Right now I feel thrilled to have made my entry into films as a director. Imagine the script of my first film was by Sreenivasan and had Mammootty acting in it! What more do you need? I am yet to commit new projects though there are talks going on.