Mammotty teams up with Shaji Kailas

Mammootty will do the lead role in hit-making director Shaji Kailas’ next film, to be produced by M.Mani under the banner of Aroma. The film will be scripted by A.K.Sajan and may start rolling in a couple of months’ time.

Shaji Kailas and A.K.Sajan are at present engaged in the making of ‘Red Chillies’, starring Mohanlal in the lead. ‘Red Chillies’, which is currently in progress in Kochi, will soon get shifted to Singapore. The film is reportedly a murder mystery with nine heroines in the cast.

The Mammootty-Shaji Kailas team has produced several hits like The King, The Truth and Valyettan. Shaji ventured into feature films through the low budget movie News. It was Thalasthanam (featuring Suresh Gopi as a hero seeking revenge for his brother’s death) which made Shaji noticed by the masses. Then came another hit, again from team Ekalavyan, in which Suresh Gopi played the role of Madhavan IPS, who fights the illegal drug trading done by the help of a Swamiji (played by Narendraprasad). But it was Commissioner, released in 1994, which catapulted Shaji to fame and gave Suresh Gopi the name Super Star.

Details about Shaji Kailas’ Mammootty-starrer are yet to be worked out. Let’s wait for the same to come across.
No comments:
Email ThisBlogThis!Share to TwitterShare to FacebookShare to Pinterest

‘Maya Bazaar’ has as the lead character, Ramesan, who buys old cars, dismantles them and sells the spare-parts at cheaper prices. And Ramesan lives in an area known as Maya Bazaar, where many others like him too dwell and do the same kind of business. Ramesan anyhow is a very upright kind of guy, who sees his job as something much more than a mere job. For him each and every car that he buys and dismantles represents the philosophy of life itself.
Ramesan has a very strong opponent in Bhadran, who too deals in second-hand spare-parts just like him. Bhadran has always been eager to fight it out with Ramesan, but due to the intervention of Josettan (real name Jose, called by everyone as ‘Josettan’ due to his age), who runs a tea-shop, the clash has often been averted. This is because Ramesan holds Josettan in high esteem.

It is into the life of Ramesan, Bhadran and many such other people in the street named Maya Bazaar that the film ‘Maya Bazaar’ strives to explore. While Mammootty plays Ramesan, it is Kalabhavan Mani who becomes Bhadran.

Tamil actress Sheela makes her entry into Malayalam with ‘Maya Bazaar’ under a new name Maya, which incidentally happens to be the name of the character she portrays in the film.

‘Maya Bazaar’ reportedly has a storyline spiced up with enough of colourful songs and sufficient dosage of humour, provided by the likes of Salim Kumar, Suraaj Venjaramoodu, Bijukuttan etc.

The film is scheduled to hit the screen on October 1.
No comments:
Email ThisBlogThis!Share to TwitterShare to FacebookShare to Pinterest
Labels: Mammootty, Mammootty Films, Mayabazar

Mammootty and the crew of Kuttyshranku are in Kollam to shoot the remaining portions of the film. This second schedule started with the onset of monsoon to capture the rainy season and is continuing at a brisk pace. Mammootty has three heroines and he appears in three different get ups in this film directed by internationally acclaimed director Shaji N. Karun.


The story is told through the eyes of the three heroines, who, after the death of Kutty (Mammootty), remember him. The film will need another schedule to wrap up the shooting; in each schedule, Mammootty dons a different get up. The film is expected to be completed by the end of November.

Bengali actress Kamalinee Mukherjee, Padmapriya and a Srilankan actress are three heroines. Mammootty is expected to join the shooting of Love in Singapore directed by Rafi Mecartin after two weeks.
No comments:
Email ThisBlogThis!Share to TwitterShare to FacebookShare to Pinterest
Labels: Mammootty, Mammootty Films 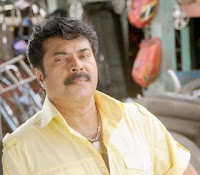 Mammootty's Ramzan movie 'Mayabazar' will grace the theaters by the
first day of October. The movie from debutant Thomas Sebastian will
open in 80 centers all across theater on the same day.

The movie will clash with another big budget war movie from
Mohanlal's 'Kurukshetra' which may get into theatres a couple of days
before Ramzan.

`Mayabazar' will have a lively Mammootty dancing to two fast songs of
the movie. The music is by Rahul Raj while T A Rasaaq pens the
dialogues. Tamil actress Sheela debuts to Malayalam, with this movie
while Kalabhavan Mani appears in a negative role opposite Mammootty.
No comments:
Email ThisBlogThis!Share to TwitterShare to FacebookShare to Pinterest
Labels: Mammootty, Mammootty Films, Mayabazar

Mammootty's new film 'Love In Singapore' has changed its main location. The main location was 'Singapore'. The movie will be now shot in Bangkok, as the crew finds that they will have better opportunities in Bangkok, than in Singapore. The director duo of Rafi and Mecartin are now planning to change the movie's title also to 'Love In Bangkok'.

The movie will have Mammootty as Machu, a man who cruised into the lanes of financial heights starting his life as a scrap dealer. Mumbai model Keerthi Kunhal is the heroine of the movie, which is produced by H.H.M Productions.

The movie will start its shoot on the 9th of October at Karakkudi.
No comments:
Email ThisBlogThis!Share to TwitterShare to FacebookShare to Pinterest
Labels: Love in Singapore, Mammootty, Mammootty Films 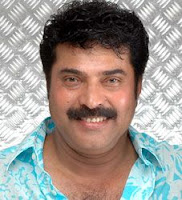 Malayalam superstar Mammootty, who is busy shooting for Maya Bazaar here, says he has so much work that he can't think of taking a break during this festive season.
"Yes, I am on the Ramadan fast, but I just cannot afford to sit idle on this pretext. Even tomorrow (Friday), which is Thiruvonam day, the most important day for all Keralites, I am busy shooting," said Mammootty.
The shooting of the film is taking place in his hometown, so Mammootty, who turned 55 Sunday, is able to spend time with his family.
Every year both the Malayalam superstars - Mammootty and Mohanlal - have at least one release during Onam, but this year neither of them had any new film during the festive season.

"See, I had a release, but work on Pazhassi Raja is not complete," he said.

This year, the Malayalam box office reports are not so satisfactory. Of 38 films that were released, only three movies are doing good business - Mammootty's Annal Thumpi, Mohanlal's Madhampi and Jayaram's Veruthe Oru Bharya.
No comments:
Email ThisBlogThis!Share to TwitterShare to FacebookShare to Pinterest
Labels: Mammootty

Malayalam Megastar Mammootty celebrates his Birthday on September 7th.On the Megastar's middle age he acts such as a Young man. Not only acting, he is too fair as youngsters on his middle age.
During a career spanning more than quarter of a century, he has acted in more than 300 films and, he has won the National award for best actor three times, FilmFare awards for seven times, FilmFare Legend award in the year 2007 and six State awards(6).
On this Birthday it is planned to celebrate at Mayabazaar set. Mammootty celebrate his Birthday at Mayabazaar set related to Mayabazaar Shooting.
All Kerala Mammootty Fans and Welfare Association (MFWA) is also ready to celebrate their Megastar's Birthday.
'Mammootty Special - The first and only blog about the Malayalam Megastar Mammootty' takes this opportunity to wish a very happy birthday and even more success.
On telemedia also there is healthy fighting to celebrate Mammootty's birthday.
In telecom medias Airtel,Idea,Vodafone,Reliance,BSNL and all are ready to celebrate Mammootty's Birthday with its Special Contents.
Airtel, Idea and BSNL are started new portals for this purpose.
In Idea 55456252 is the Special Portal. There is a page only for Mammootty is in Airtel Live.
10 comments:
Email ThisBlogThis!Share to TwitterShare to FacebookShare to Pinterest
Labels: Mammootty, Mammootty Birthday

Richa Pallod, the model turned actress who has acted in Hindi, Tamil and Telugu films is making her debut in Malayalam opposite our own Mammootty.

She is cast opposite him in a film titled Daddy Cool.

Richa had done Shajahan with Vijay and her last film was a small role in Something Something ... Unakkum Enakkum.