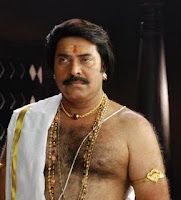 Mammootty-Hariharan and M T Vasudevan Nair will finally present the magnum opus 'Pazhassi Raja' before viewers by the second week of April. The historical which was in the making for the last two years is rumored to be made on around ten crores, which makes it the biggest budgeted film of Mollywood.

Produced by Gokulam Films, the movie features a big cast including Sarthkumar, Suman, and Kanika in the key roles. The movie was completed in more than ten schedules in ten locations taking around 140 days of shooting. Gokulam Films is planning to go for a wide release to cash in the heavy investment made on this historical.
Email ThisBlogThis!Share to TwitterShare to FacebookShare to Pinterest
Labels: Mammootty, Mammootty Films, Pazhassiraja