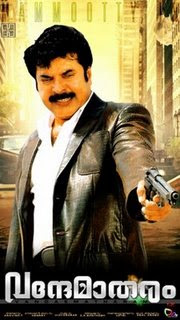 Director Arvind expressed his happiness that Vande Mataramhas fulfilled his expectations and come out well. Describing the film’s story in a single line, the director said it is an investigative action thriller, the story of a group of police officers who go hunting for a group of terrorists who have been creating havoc in the Tamil Nadu-Kerala border.

Produced by Henry with a whopping budget of 14 cores under the banner of Pankaj Productions, the film begins with a scene showing that the central investigative agency (RAW) finds out that Malik, head of a terrorist group, has crossed the international border and entered India to execute deadly explosions in South India. Gopi Krishnan (Mammootty), Southern zone command director of the Intelligence bureau, is assigned the task of tracing the plans of the organization and stopping them from creating any damage.

Gopi Krishnan forms a core team with support from Anwar Hussain (Arjun) who joins the group on deputation from the State police. The execution of 'Operation Malik' forms the climax of the movie . The film will feature two heroines, Sneha as a pilot and wife of Gopi Krishnan and Sharadha Arya as an ornithologist. Deepak J.D. makes his debut as the deadly villain. 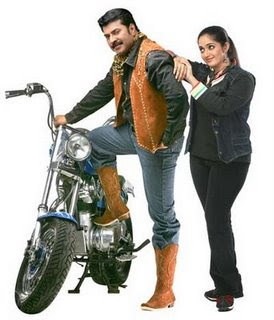 Malayalam superstar Mammootty's upcoming Malayalam filmEe Pattanathil Bhootham is directed by Johny Antony of CID Moosa, Kochi Raajaavu and Thuruppugulaan fame. As the name suggests, Ee Pattanathil Bhootham is a fantasy-filled adventure, donning Mammootty in a double role as a bike jumper named Jimmy in a circus company and a friendly ghost! The film has been scripted by Siby K. Thomas and Udayakrishnan, the hit pair of blockbuster Twenty:20.

The story revolves around an orphan Jimmy brought up by Krishnettan (Innocent), who runs a street circus group. Jimmy rescues a couple of street children from some goons and they become part of the street circus group, which is later merged with a commercial circus company, run by Philipose (Janaradhanan) and his daughter Ancy (Kavya Madhavan), a management graduate. While Jimmy is away, the kids again run into some trouble. However, they are rescued by a ghost who only they can see. The film develops from this point.

Produced under the banner of Hi Bright Movie Creations, the film has cinematography by Azhagappan and music by debutant music director Shaan Rahman. Kavya Madhavan has already appeared in six films with Mammootty, but never as his heroine. For the first time in her career, she is Mammootty's heroine inEe Pattanathil Bhootham, which is expected to hit theatres during Vishu 2009. Also in the cast are Jagathy Sreekumar, Innocent, Suraj Venjaramoodu, Salim Kumar and others. The film has plenty of graphics and special effects. 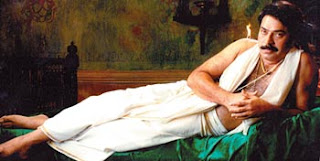 The long in the making Mammootty magnum opus Pazhassi Raja which was finally scheduled for release for Vishu 2009, has now been postponed.
The film produced by Gokulam Gopalan, written by the legendary M.T Vasudevan Nair and directed by veteran Hariharan was one of the most eagerly awaited films of the year. The film has Mammootty in the lead role along with Kaniha, Tamil actor Sarath Kumar, plays the role of his trusted commander-in-chief named Dalapathy. The others in the cast are Manoj.K Jayan, Kalabhavan Mani, Suman and Padmapriya.
The biopic tells the story of the legendary ruler and warrior Pazhassi Raja the 'Lion of Kerala', who took on the British in the forests of Malabar in the 18 century. He is regarded by historians as the first freedom fighter of India. The movie will showcase his heroic fights against the British in the jungles of Wayanad during the 1790s.

Now the entire shoot of the film is over. The post production work of the film is to start in Chennai and will have a lot of special effects and graphics.

Added to that the maestro Ilayaraja has composed songs for the film and will start his re-recording only after Editor Sreekar Prasad completes his editing. All this will take three or four months, hence the delay in release.
It looks like Pazhassi Raja has been pushed to Onam 2009.

Not the age but the activeness is the mantra of success, Mammootty said in a book release function at Kochi, on Thursday. He was releasing a book Rathriyute Udal written by Abraham Thomas.


There is no end for the habit of reading as we suspect. The new generation is reading in different manner, not just from books, but also from other media accessible to them. T.N. Prathapan MLA received the book from Mammootty.