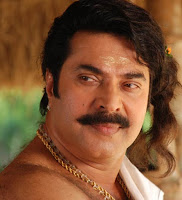 Resul Pookutty, who won the Academy Award for Best Sound Mixing for Slumdog Millionaire, voluntarily opted to work for the film, after watching Pazhassi Raja's post production work in Chennai. Resul is said to have been highly impressed by the film.

To be simultaneously released in Malayalam, Tamil, Telugu and Hindi with the same title, Pazhassi Raja is scheduled to grace theatres on August 15. The movie, according to the makers, will be the biggest release ever in the history of Malayalam cinema with more than 200 prints.

Popular Tamil-Telugu actor Suman plays the villain, Pazhaiveetan Chandu and Tamil actor Sarathkumar plays Edachena Kunkan, the chief lieutenant of Pazhassi Raja. This is Sarathkumar's first appearance in Malayalam. Thilakan dons the role of king Kurubranaad, who revolted and plotted against Pazhassi Raja. Jagathy Sreekumar dons the role of Kannara Menon, an employee of the British Government. Padmapriya and Kanihaa (also spelt Kanika) are the heroines.

Produced by Gokulam Gopalan under the banner of Gokulam Films, Pazhassi Raja is made with the biggest-ever budget for a Malayalam movie, rumoured to be more than Rs. 20 crores. Manoj K. Jayan, Peter Handley Evans and Harry Key play pivotal roles in the film which has music by maestro Ilayaraja and songs penned by poet O.N.V. Kurup.
2 comments:
Email ThisBlogThis!Share to TwitterShare to FacebookShare to Pinterest
Labels: Mammootty, Mammootty Films, Pazhassiraja 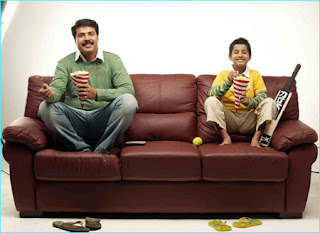 Megastar Mammootty's latest film 'Daddycool' is in fullswing. Its shooting is going cochin and nearby places. The Climax is going to shoot in Chennai.


He is Antony Simon, a crime branch circle inspector, who had joined the service after being fascinated by its prospects. However, after the birth of his son, Antony's attention shifts to his kid, who he spends most of time with. Richa Pallod plays Mammootty's wife.

"In one line," says Aashiq, "Daddy Cool is about the adventures of an eight-year-old kid and his father, a police officer."
He says that the first visual that hit his mind while thinking about the storyline was that of a cop who converts his wireless set into a radio and listens to cricket commentary on it.
Aashiq, an ad-filmmaker has earlier assisted director Kamal in several films.
"As it is true for any kid of his age, his dad is no less than a superhero for Antony's son, Aadi. Of course, his wife Annie was quite irked by Antony's cool nature," says the director.

Richa Pallod, who has done around 200 ads besides films in Hindi, Tamil and Telugu, jokingly says that it was quite a challenge for her to be angry most of the time and also play the mother of an eight-year-old kid.


"Annie works in a bank and has enough reason to feel worried as her hubby is too easygoing, quite unlike her. She is a nice woman, who is more matured and disciplined. She hates it when she finds her husbands super cool nature, when he wastes his time playing cricket with their son and his friends," says Richa.

Master Dhananjay plays Aadi. A student of Loyola School, Thiruvananthapuram, he has earlier acted in films like Innathe Chinthavishayam, Baba Kalyani and Nagaram.
Asked who among his two megastars is his favourite and he says, "I love both Mammootty and Mohanlal and wants to be a hero like them, when I grow up."
Govind Padmasurya, the protagonist of the award-winning film Adayalangal, plays cricketer Sreekanth. Biju Menon, Ashish Vidyarthi, Sai Kumar, Vijayaraghavan and Radhika include the rest of the cast.
Sameer Thahir is the cinematographer while Biji Bal is the music director.
No comments:
Email ThisBlogThis!Share to TwitterShare to FacebookShare to Pinterest
Labels: Daddy Cool, Mammootty, Mammootty Films 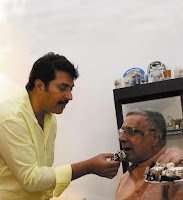 Malayalam superstar Mammootty visited veteran actor and villain Jose Prakash at his son Rajan's house in Vyitila near Ernakulam to wish him on his 84th birthday.


Mammootty met Jose Prakash who was in a wheel chair. With a group of family members and media persons, Jose cut the birthday cake and Mammootty served a piece of cake to him. Jose Prakash said he was lucky to have Mammootty on his birthday and even proud to say that he still remembers him despite his busy schedule as a superstar.

Mammootty said Jose Prakash is a father figure to him. Having acted together in many movies as hero and villain, they spent some time to chat about their experiences in cinema. Starting his career in films in 1961, Jose Prakash has acted in more than 58 movies.
No comments:
Email ThisBlogThis!Share to TwitterShare to FacebookShare to Pinterest
Labels: Mammootty

Mammootty's upcoming flick Palery Maanikyam is based on the murder-investigation story that took place in the early seventies but now the makers of the flick are planning to give a new face lift to the film’s story track.
The news is doing the rounds that director Renjith and his crew are planning to shoot the first schedule of the flick in the beautiful city of Paris. Mammootty is playing the character of an investigator who is lands in Paris from the nation’s capital in order to probe the murder of a man named Manikyan. The film is being produced by A V Anoop and Subair under the banner of A V A Productions and Varnachithra Big Screen.
No comments:
Email ThisBlogThis!Share to TwitterShare to FacebookShare to Pinterest
Labels: Mammootty, Mammootty Films, Palery Manikyam 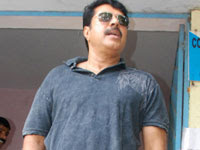 Superstar Mammootty cast his vote at Ernakulam, Kadavanthra health circle office polling booth. He came in a silver colour Pajero, wearing a black t-shirt and blue jeans. When Mammootty reached there, voters in their respective queues broke their lines and rushed to have a glimpse of their favourite hero.


Mammootty entered the polling booth and quickly returned as he had forgotten to take his identity card. People expressed surprise whether it is compulsory for a famous figure like superstar Mammooty to have a card to cast vote. After some time his friend arrived with the identity card, he entered the booth and cast his vote.

Kalabhavan Mani and Mala Aravindan cast their vote in Chalakudy and Mala. Mukesh registered his vote with his family at Kollam, while Jagadeesh came all the way from Ernakulam to cast his vote in Thiruvananthapuram. Meanwhile Dileep could not cast his vote as he was engaged in the sets.
No comments:
Email ThisBlogThis!Share to TwitterShare to FacebookShare to Pinterest
Labels: Mammootty

Mammootty's Junior Senior to be Super

Mammootty's Tamil film Junior Senior will be dubbed into Malayalam as Super. Entire film was shot in Malaysia. Director is J Suresh. Leena Sidhu who was selected as Miss Malaysia is the heroine opposite Mammootty in the film.

Mammootty dons the role of highflying business man, Sathya Narayanan in Malaysia. Balu is his friend and an associate in Sathya Narayanan's business. Leena is Balu's girlfriend. One day Balu comes with Leena and introduced her to Sathya as his friend but he hides the truth that she is his girlfriend. Leena is very cunning. Sathya being rich she plans to hang on him to fullfil her dreams. She had dreamt to lead a lavish life and starts loving Sathya. Later Balu is acquainted with the fact that Sathya is in love with Leena but he is not in a condition to react. Accidently Sathya comes to know about Balu from Leena's words. It reveals her attitude to Balu and her motive. Sathya is shocked and the story takes a turn from there.

Yuva Shankar Raja is the music director of the film. Kailas has penned the lyrics and dialogue.