A Manly send-off to Murali 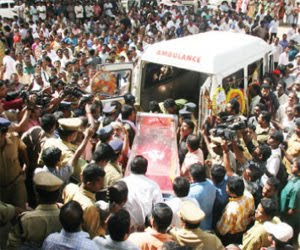 There were no tears, except the tiny drops that escaped the eyes of KPAC Lalitha and Sona Nair. The flower vendor who had found a convenient spot beneath a shade tree on the Kerala University Senate Hall campus couldn’t sell a single rose petal. No one shouted ‘Murali will live through us’ when his mortal remains were brought to the Hall or taken out from there.
Murali had abhorred tears. For, they were not manly. Flowers he had not loved. They reminded you of weak-hearted Romeos. And, sloganeering was taboo as he firmly believed in action, not speeches. But grief, frozen as an iceberg, pervaded the atmosphere like the dank odour of wilted marigold flowers.

On the dais of the University Senate Hall, Murali slept like a king on a bed of flowers. He was draped with a red flag that reminded one of comrade TK in ‘Lal Salaam’. Beside his body sat comrades Kodiyeri Balakrishnan, M.A. Baby, P.K. Sreemathi, P.K. Gurudasan and K.P. Rajendran. Comrades V.S. Achuthananadan, Veliyam Bhargavan and Pinarayi Vijayan also had come to offer the red salute.
``It was here that he celebrated his silver jubilee in acting,’’ said Arun, one of the organisers of the programme in 2005. The Murali Show, organised by the Kerala University Union, had brought together the director of ‘Njattadi’, Murali’s first film; Priyanandanan, director of Murali’s National award-winning movie

‘Neythukaran’; Sona Nair, Murali’s heroine in ‘Neythukaran’, and many of his close friends.
An overwhelmed Murali had spoken for more than one-and-a-half hours that day. A speech that covered his childhood, his days as a stage actor, his association with Narendraprasad and the ups and downs in the film industry.

Murali had abhorred tears. Flowers he had not loved. And, sloganeering was taboo as he firmly believed in action, not speeches.
(Indian Express)