Leading producer Aroma Mani has informed the theatres that his Mammootty Christmas release August 15, directed by Shaji Kailas has been postponed.

Due to heavy rains in Thiruvananthapuram, the last outdoor schedule of the film was washed away, hence the delay.
The latest we hear is that Mammootty'sBest Actor directed by Martin Prakkat which was scheduled to release on December 3 will now be postponed to December 24.

So Best Actor will be Mammootty's Christmas release.
Meanwhile the buzz is that August 15will now release on January 21.
No comments:
Email ThisBlogThis!Share to TwitterShare to FacebookShare to Pinterest
Labels: August 15, Mammootty Films

We have certain instances to believe that some young stars in Malayalam films are arrogant, though others may call it a “bold act”! To name a recent case, young superstar Prithviraj recently told a prominent daily, "Those who don't like me need not see my films." But megastar Mammootty does not feel that new generation stars are arrogant!

"I don't think the youngsters are devoid of respect towards their seniors. At least, I have never had such an experience. We need to remember that this is an entirely new generation. Their behaviour is bound to be different. They wouldn't think like people belonging to another generation,' Mammootty said during an interview with a popular film weekly.

"Arrival of new stars is a continuous process that goes on. Those who have real talent would survive. There are several talented youngsters today. I wouldn't name any one particular person, because then it would be discouraging to the rest," Mammootty added.

No comments:
Email ThisBlogThis!Share to TwitterShare to FacebookShare to Pinterest

Mammootty shoots in Bengaluru for Shikari

Megastar Mammootty was in Bengaluru on Friday and Saturday, shooting a stunt scene for his first Kannada-Malayalam bilingual Shikari. He had a very jovial and pleasure-filled afternoon at the Sapota Garden in Bangalore Palace with the Kannada film media, who were thrilled at his simplicity. Mammootty's actions surprised all. Why? They resembled those of Dr. Vishnuvardhan, who used to be similar in his attitude with media persons. Dr. Vishnuvardhan always came close to media after his formal address and interacted with them in a friendly manner; so did Mammootty.

Mammootty was very keen in explaining his intense role in the film. He plays a software techie who gets deeply involved in a novel he reads and later becomes one of the characters in the same novel.

Director Abhay Simha, who is directing Shikari, said that history has the answers for present problems. The award winning director of Gubbachchigalu also spared a few moments for the media. Abhay Simha has already shot Shikari for 47 days, in which the major schedule was at Thirthahalli in Shimoga running for 27 days. The action director of Singam and Naan Mahan Alla was capturing the stunt scenes in Bengaluru.

Producer K. Manju was extremely happy with the way Mammootty handled the film and said Mammootty is a perfectionist. The climax sequence will be shot on December 10th. The film is scheduled for March 2011 release.

No comments:
Email ThisBlogThis!Share to TwitterShare to FacebookShare to Pinterest

Babu Janardhanan casts Mammootty in his first movie, Bombay March 12.
Babu Janardhanan had taken us back to the time of the emergency and naxalism in Thalappavu, the film which he had scripted and was directed by Madhupal. And now, with his debut directorial venture, Babu Janardhanan, who has also scripted films like Achchanurangaatha Veedu, Avan Chaan-diyude Makanand Vasthavam, goes down memory lane once again.
Bombay March 12, which is Babu Janardhanan’s debut directorial venture, has Mammootty in the lead and goes back in time, to the early 1990’s. The film zooms in on the Mumbai riots of 1993 and strives to talk about the sufferings of the common people during those turbulent times.
Says Babu Janar-dhanan, “Yes, the project is confirmed. Though shooting dates are yet to be confirmed, we plan to begin it in March or April’.
(IndianExpress)
No comments:
Email ThisBlogThis!Share to TwitterShare to FacebookShare to Pinterest
Labels: Bombay 1993 March 12, Bombay March 12, Mammootty, Mammootty Films

Bhavana thrilled about being in Mammootty's dreams!

Bhavana is all thrilled about being in Megastar Mammootty's dreams. The actress would appear in a cameo in the Megastar's latest film 'Doubles'.

Tapasi is Mammootty's heroine in the film, and would be wearing a purdah for a major portion of the film. The hero who doesn't get to see the girl, dreams of a sequence where he hopes that the girl would look like Bhavana.

Vayalasr Sarath has written the lyrics of the song in which Bhavana would make an appearance, and James Vasanth has composed the music. The song would be shot at Pondicherry.

'Doubles' is being directed by Sohan Seenulal and has Nadia Moithu doing a major role along with Mammootty.
No comments:
Email ThisBlogThis!Share to TwitterShare to FacebookShare to Pinterest
Labels: Doubles, Mammootty, Mammootty Films

Mammootty fined by the traffic police!

Megastar Mammootty was caught riding a motor bike without wearing a helmet in the capital city. The traffic police fined the actor much to the amusement of the onlookers.

It was only later that the crowd understood that the actor was taking part in the shooting of his latest film 'August 15', directed by Shaji Kailas.

S N Swamy, the script writer of the film has included a scene in the film, where Perumal, the super cop that Mammootty plays in the film rides a bike without a helmet. Perumal is stopped by the traffic police, and though he shows his official identification card, he remits a fine to the traffic police officials.

The scenes were shot before the Golf Club. In the film that is being completed at a rapid pace, Mammootty plays a continuation of the character that Swami had created for the film 'August 1', years back.
No comments:
Email ThisBlogThis!Share to TwitterShare to FacebookShare to Pinterest
Labels: August 15, Mammootty, Mammootty Films

Mammootty Owes the Award To Sathyan 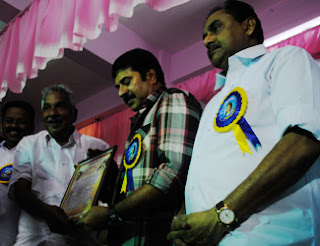 Versatile actor Mammootty said yesterday that he owed the depth in his acting to the late thespian Sathyan, whose 99th birth anniversary was marked in the city.

“I am indebted to Sathyan sir for the formation of a complete actor in me. In the initial days as an actor I had followed Sathyan’s style and patterns,” said Mamootty, after receiving the Sathyan Memorial Award inducted by Kerala Cultural Form on Tuesday here at Sathyan Memorial Hall.

“It is him who guided the actor in me. In the initial days of my career I used to imitate his acting styles in front of a mirror. It all nurtured me as a good actor,” he said.

The 99th birthday celebrations of Sathyan and the prize distributing ceremony were inaugurated by V Surendran Pillai, minister for Youth and Port Affairs.


D Devaprasad, general secretary of the forum, welcomed the gathering, while Thirupuram J Yesudas presided over the function.