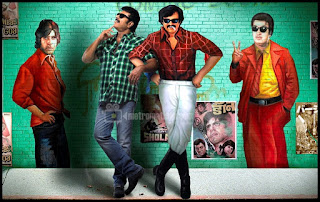 Now the latest we hear is that the film has been preponed to December 9. Along with Mammootty, there is strong supporting cast headed by Lal, Nedumudi Venu, Salim Kumar, Vinayagan and a special cameo by Sreenivasan in a pivotal role.

The film has good songs by Bijibal is produced by leading caterer Naushad under the banner of Big screen Entertainments.

It is a smart move by Mammootty and his distribution company Play House to release Best Actor on December 9.

It gets them one week free run without any competition. The other big Christmas releases are Mohanlal's Kandahar on Dec 16, Kamal Haasan's Manmadhan Ambu on Dec 17 and Dileep's Mariyum Kunjadum on Dec 24.
Email ThisBlogThis!Share to TwitterShare to FacebookShare to Pinterest
Labels: Best Actor, Mammootty, Mammootty Films