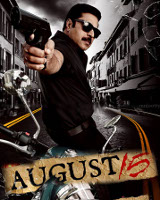 Shaji Kailas directed Mammootty's suspense thriller August 15 produced by veteran Aroma Mani has been postponed again for the third time.
August 15 which was slated for release during Christmas was postponed to February 3, as the shoot got delayed.

The latest we hear is that Aroma has informed theatres that it has been shifted to March 30!
The film is a sequel to August 1 directed by Siby Malayil, more than 20 years back.

The reasons for the postponement are not clear, though the rumours are that Aroma does not want to release the film in February.