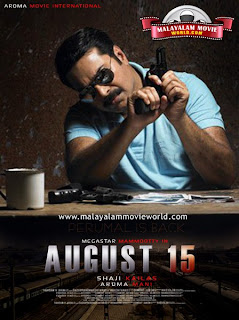 Mammootty's yet another popular character is returning to screens again through August 15. Mammootty's role as Perumal, a Police Officer in the 1988 movie August 1, was a hit. August 15 will again have Mammootty as Perumal.

Directed by Shaji Kailas, this film scripted by S. N. Swamy, who wrote the script for August 1 as well. August 1 was directed by Sibi Malayil.

August 15 also have a Chief Minister as in August 1 and the role is enacted by Nedumudi Venu. Yakshiyum Njanum actress Meghana Raj is be the heroine in this movie.

M. Mani produces August 15 under the banner Sunitha Productions. Pradeep Nair is the cinematographer. Kochu Preman, Lalu Alex, Thalaivasal Vijay, Biju Pappan, and Balachandran Chullikkad are the others in the cast.


The release of the movie will be in the next week of February, most probably on February 10th.
Email ThisBlogThis!Share to TwitterShare to FacebookShare to Pinterest
Labels: August 15, Mammootty, Mammootty Films