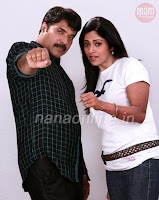 The latest Mammootty movie in the sets 'Doubles' will feature Tamil star Sonia Agarwal in one of its songs. The actress who is for the first time appearing in a Mollywood movie, will be featured in an important song that will also have Roma and Reema Kallingal to catchup the steps. This song set to music by James Vasanthan will be shot in the coming weeks in Bangalore.
Directed by debutante Sohan Seenulal, 'Doubles' will have Tapsee as the heroine. Scripted by Sachi-Sethu, 'Doubles' is produced by K K Narayanadas.
Email ThisBlogThis!Share to TwitterShare to FacebookShare to Pinterest
Labels: Doubles, Mammootty, Mammootty Films