Resul Pookutty to unite Mammootty and Big B 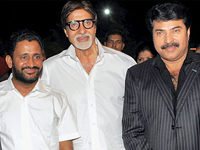 One of the best known technicians of Indian cinema, Resul Pookutty, had always expressed his interest in directing films. In fact he had one project going five years ago which got shelved due to financial reasons. Resul was then planning to make a movie out of the famous novel by Anand- ' Govardhan's Travels' with Mammootty as the hero. It was then planned in three languages, but the last minute crisis led the master technician to concentrate back on his sound engineering business.

But now Resul is taking more active steps to realise his dream. This time he will be bringing in Megastar Mammootty and none other than 'Big B'- Amitabh Batchchan for the first time together for his movie. The flick will tell the emotional story about a father -son relationship and will use the best of the technicians from Bollywood. As there are many more international projects coming his way, Resul will start working on his debut directorial venture only after completing his current assignments.
Email ThisBlogThis!Share to TwitterShare to FacebookShare to Pinterest
Labels: Dr.Mammootty, Mammootty