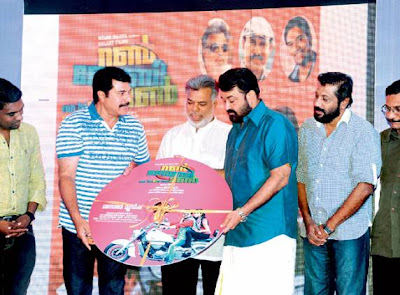 The last time the two superstars got together on stage was for the audio release of Mammootty’s Thappana.
This time, the occasion was the audio release of Mohanlal’sRun Babby Run. Dressed in a blue striped Tee and jeans, Mammootty presented a sharp contrast to Mohanlal, who was attired in a traditional shirt and mundu.
Speaking about Run Babby Run, Mohanlal said, “I am not going to repeat the cliché that my film is different; what I want is for the audience to watch the film in theatres and pass their verdict. I play the role of a TV channel cameraman and it is a thriller.”
Mohanlal has also crooned a melodious song Aatumanal payayil... which has been eliciting a good response from the listeners. The song visual shows Mohanlal frolicking with Amala Paul and is set in a sensuous mood.
Speaking about this number, Mohanlal said, “I am happy that I got an opportunity to sing this song and the response from the public has been very encouraging; so I am planning on crooning more songs!”
Mammootty, who took to the stage also complimented Mohanlal’s talent and said, “I have been hearing this song constantly on the airwaves and was wondering about the film name. It is only now that I realise that the song is from this film.
Though Run Babby Run is still to be released, I can confidently say that this song will be a super hit. It is one of Lal’s best songs.” On a lighter note he quipped, “Mohanlal can continue to sing!”
The others present on the occasion were producer Milan Jaleel, Siddique, B. Unnikrishnan, Johny Antony in addition to the director of the film Joshiy. Amala, busy with her Tamil film, could not make it to the audio release.
Email ThisBlogThis!Share to TwitterShare to FacebookShare to Pinterest
Labels: Mammootty, Mammootty and Mohanlal