Kamalhasan teams up with Mammootty ? 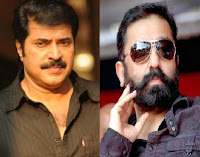 Kamal Haasan, highly impressed with UTV's A Wednesday made with legendary Bollywood actors Naseeruddin Shah and Anupam Kher, is considering remaking it in Tamil and Malayalam. The excitement does not stop there the thespian also plans to reprise the part played by Naseeruddin and make Malayalam superstar Mammootty play Anupam Kher's part!

UTV's A Wednesday, which summarizes a series of sensational events taking place on a Wednesday in the life of a police commissioner (Anupam Kher) and an anonymous caller (Naseeruddin Shah) demanding the release of four heinous terrorists. Thus, Mammootty will be in the role of Police Commisioner. Let's wait for another Police roll from Mammootty.

Rumors are that Mammootty has already expressed his consent to enact the role, which will be of great interest for the fans of these great actors. Let's wait for another Police roll from Mammootty.
Email ThisBlogThis!Share to TwitterShare to FacebookShare to Pinterest
Labels: Mammootty, Mammootty Films