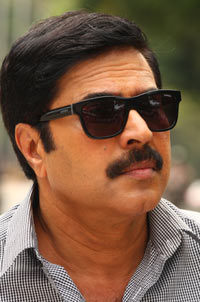 Mammootty'sAugust 15was puzzling Mollywood fans with its release date. Now it has been finally announced that August 15 will hit screens this coming Friday. This Shaji Kailas directed venture is a sequel of the 1988 movie August 1, starring Mammootty and Urvashi. August 15 was originally scheduled for a release on December 25th last year, but was later postponed to January 26th, and finally to March 25th.

Mammootty, as in the original, will appear as a police officer who safeguards the Chief Minister from an assassination attempt. The similar plot adopted will also have scenes appealing to the current political situation in Kerala, where an election for the State Legislature is scheduled on April 13th.
August 15 is Mammooty's first release of 2011 and the film is scripted by S.N. Swamy. The cast includes Siddique, Thalaivasal Viay, Saikumar, Balachandran Chullikad, Swetha Menon and Meghna Raj. Yakshiyum Njanum fame Meghna Raj is the heroine